To enjoy an unforgettable holiday.

You can admire a beautiful sight of the blue Sicilian sky, the sea and the mount Etna, the highest active volcano of Europe. 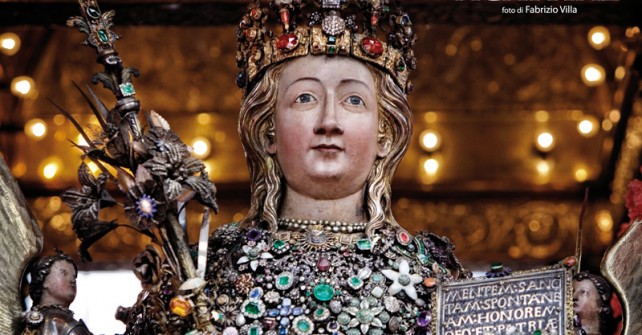 Catania has been celebrating its patron saint Agata for centuries. During the spectacular feast,a silver coffin(“a vara”)with a bust containing Agata’s relics is carried in procession through the city from a big number of devoted citizens(“i devoti”).The devotees use some long cords more of 100 meters and they wear a typical white tunic(“il sacco”)with a drawstring around their waist,a black bonnet,a handkerchief and white gloves.People joining the feast also show their devotion shouting all together: “cittadini,cittadini,semu tutti devoti,tutti ?”(citizen,we are all devotees,aren’t we?)The coffin is followed by high wood columns(“ceri”o“cannalori”)that represent the guilds of the arts and works of the city.The procession and the whole feast is followed by hundreds of people.

The preparations for the feast are being made since the second half of January but the celebrations are from the 3rd to the 5th of February.The whole city is involved giving life to one of the most important feast in the world in which both religion and folklore are closely linked.

It starts when 11 “candelore”(high wood columns rich in sculptures and decorations containing candles) are carried in procession by 4 to 12 men:wax is offered to the saint(it is called the rite of wax).The procession route starts from the church called santa Agata alla Fornace in Stesicoro square,then it rises on the ancient furnace where Agata was martyred and finally it stops at the cathedral square.The procession is followed by all the civil and religious authorities.

After it, two eighteenth-century carriages of the ancient senate go out of the building of elephants(palazzo degli elefanti( the actual city hall)and reach san Biagio’s church so that the mayor and some members of the counsil can bring the keys of the city to the religious authorities.This first day ends at the dome square with a concert of songs dedicated to the saint and a pyrotechnic show in accordance with the rhythm of the music.The celebrations will continue the following day with a mass(la” messa dell’ aurora”) at the dome cathedral.

Inside the cathedral,for the whole year,the bust containing the holy relics is in a small room closed by a gate whose keys are guarded by three different people.On the 4th.of February the bust is loaded on the silver coffin and moved on the high altar covered by red carnations that symbolize the saint’s martyrdom. At this moment the devotees meet the saint so they revere her trough a typical shout while they’re waving a white handkerchief.

After church, the procession begins:the coffin is carried(external route)through a long tour that touches some meaningful places to the saint:the slope of the Capuchins up to saint Domenico’s church. Later on the coffin is carried towards the sea(the actual”archi della marina”) near the harbor of Catania: a place that symbolizes the departure of the holy relics to Constantinople. The tour ends when the coffin comes back to the cathedral accompanied by a wonderful pyrotechnic show.Hundreds of people take part to the feast along the roads or leaned out from the balconies of their houses.

The 5th.of February( the day of saint Agata)

In the late morning,at the dome cathedral a solemn rite is celebrated to the presence of a pontifical representative and some bishops from each part of Sicily.The coffin is now covered with white carnations,symbol of Agata’s purity.Around 6 pm there is a new long tour of the holy coffin(inside route):it is carried to Cavour square(piazza borgo) by Etnea street.Here the saint stops till late in the night.The standstill is accompanied by another spectacular pyrotechnic show.Then the saint goes down to the cross between Etnea street and Sangiuliano street.The most spectacular moment of the whole feast starts: the coffin is dangerously pushed by the devotees through a steep slope(“salita di Sangiulano”).They stop at Crociferi street,the most beautiful baroquian road of the city,in front of the Benedictine monastery.Here the nuns behind the grilles tune up songs dedicated to the saint while the believers are listening silently to them from out.Only after this suggestive and mystical moment,the saint goes back to the cathedral accompanied by a last pyrotechnic show.It’s already a new day when the holy bust is finally in its little room till the following year when the city will see it again.

This website uses cookies to improve your experience while you navigate through the website. Out of these, the cookies that are categorized as necessary are stored on your browser as they are essential for the working of basic functionalities of the website. We also use third-party cookies that help us analyze and understand how you use this website. These cookies will be stored in your browser only with your consent. You also have the option to opt-out of these cookies. But opting out of some of these cookies may affect your browsing experience.
Necessary Always Enabled
Necessary cookies are absolutely essential for the website to function properly. This category only includes cookies that ensures basic functionalities and security features of the website. These cookies do not store any personal information.
Non-necessary
Any cookies that may not be particularly necessary for the website to function and is used specifically to collect user personal data via analytics, ads, other embedded contents are termed as non-necessary cookies. It is mandatory to procure user consent prior to running these cookies on your website.
SAVE & ACCEPT
Bed and Breakfast Hotei Catania