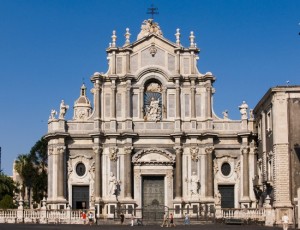 Catania is the second city of Sicily on the ionic coast.It rises to the slopes of the mountain Etna.” A muntagna”as it is called by the local inhabitants,is the highest peak of Sicily and also the highest active volcano of Europe. Etna,declared patrimony of Unesco,offers enchanting sceneries and a various and typical flora and fauna.A characteristic of the city is to be tightly tied both to the sea and to its volcano.
The volcano has given a unique structure to the city both morphologically and artistically. As a matter of fact, Catania offers a splendid black beach and a bluff of black lava rock-cliffs to north. Moreover the historical center of the city dates back almost totally to the baroque slow period as it was entirely reconstructed in lava stone after the 1693 devastating earthquake. That’s why Catania is a mixture of Baroque monuments and some others of the Greek-Roman period.
Main attractions of Catania. Catania offers many artistic and cultural points of interest among which: The cathedral square(piazza Duomo) with the cathedral and “u liotru” that is the lava stone obelisk symbol of the city, the Ursino castle(castello Ursino),the Roman Greek theater,the enchanting Crociferi street,the Benedictines’ monastery,the elegant theater Massimo,the villa Bellini,the Roman amphitheater,the rests of the thermal baths. 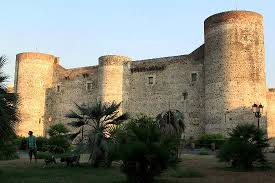 The Ursino castle was built by the Aragons in the first half of the XIII century A.C. At that time it was on a promontory to precipice on the sea but the 1669 lava casting surrounded the castle,filled the ditch and took it away from the sea.That’s why today you can find it in the historical center of the city. The building has a square plant with four cylindrical angular towers and two medians angular towers. Nowadays it holds the town museum and an art gallery.
The Roman Greek theater dates back to the I – II century A.C.It has the typical structure of the Greek theater.Characteristic details are the two-coloured stones of the Cavea and the marbles of the Orchestra.Nearby is the Odeon,a small Roman auditorium with a Cavea in lava stone.The theater is today enjoyable to the public.
You can also find some remains and of ancient thermal baths(thermae)that have been turned into places of religious cult later:the Rotonda thermal baths, the Achilleane thermal baths the Indirizzo thermal baths (near the Currò square)whose cuile nets of the furnaces and the ducts for the heating are still visible.
The Roman amphitheater together with the Roman Greek theater represents the Roman Greek park of the city.It was probably built in the III century A.C near the ancient necropolis.Today it is in the historical center of the city. It was the third amphitheater of Roman empire for greatness.It has a long history and there are lots of legends related to the folkclore of the city. On the sea, in the nord direction,there is the waterfront of Catania:a typical bluff of lava stone. A very characteristic little district is San Giovanni Li Cuti with its small beach of black sand and its small seaport where the waters of the underground river Longore come to the surface of the sea.There also a church where the painting of the Nativity(XIII century)can be admired.
Another folkloric place is the “piscaria”,the fish market rich in odors and colors. 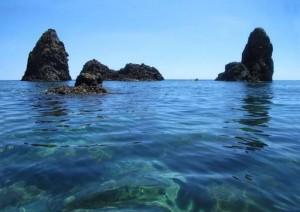 Coast of the Cyclops

The coast of the Cyclops is the oriental line of coast that goes from Catania to Acireale where the first Greeks disembarked;it offers suggestive landscapes and a lot of mythical histories made also famous from the literature and cinema. Along the coast of the Cyclops is Acitrezza.In front of the sea of Acitrezza you can admire some high rocks of lava called “ Faraglioni”.The most famous legend about Faraglioni is narrated by Humerus in the Odyssey.According to Humerus, on this coast lived Polifemo, child of Poseidone, god of the sea.When Ulysses and his crew disembarked in Sicily, after the war of Troy, Polifemo captured him and devoured six men of the crew.So Ulysses succeeded in blinding Polifemo who angry and painful,casted the big rocks in the sea in order to strike Ulysses who was safe on the ship.Since then, the Cyclops, rise from the sea of Acitrezza and give their name to the whole coast. 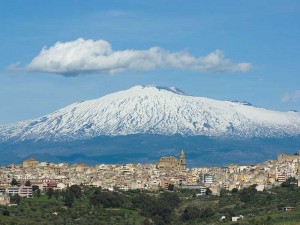 A visit to the volcano Etna is certainly advisable.
Etna, declared “heritage of humanity” by Unesco, is not only the highest peak of Sicily but also the highest active volcano of Europe.
“A Muntagna” as it is called by the local inhabitants, offers enchanting sceneries and a various and wonderful typical flora and fauna. 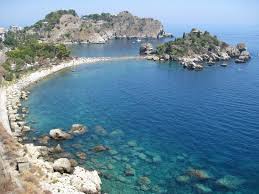 Taormina is the most well-known tourist resort of Sicily,a place of infinite beauty. It’s on a hill overlooking the bay of Giardini Naxos.That’s why you can admire a unique view combining the sea,the sky and the volcano as well.
Taormina has got one of the most important monuments of antiquity, the Greek Roman theater as well as one of the most beautiful historical centers of Italy. 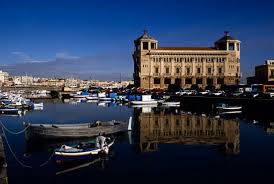 In the Southern part of Sicily you can find one of the most beautiful costs of the island: the coast of Syracuse.The city is built on an ancient Greek settlement but it was founded in 734 A.C. by the Corinthians.
The tour begins with a visit to the archaeological site of Neapolis,the Greak theater, the Roman amphitheater, and the Latonia of Paradiso, the ear of Dionisio and the ara of Hyeron.
Ortigia, the heart of the city,is characterized by the picturesque streets of the old city center.Of importance are also the dome square and the cathedral, built on the ruins of an ancient Greek temple and the famous fountain Aretusa with its papyrus plants.A folkcloric place is the local street market, rich of vegetables, fish and other local products.

This website uses cookies to improve your experience while you navigate through the website. Out of these, the cookies that are categorized as necessary are stored on your browser as they are essential for the working of basic functionalities of the website. We also use third-party cookies that help us analyze and understand how you use this website. These cookies will be stored in your browser only with your consent. You also have the option to opt-out of these cookies. But opting out of some of these cookies may affect your browsing experience.
Necessary Always Enabled
Necessary cookies are absolutely essential for the website to function properly. This category only includes cookies that ensures basic functionalities and security features of the website. These cookies do not store any personal information.
Non-necessary
Any cookies that may not be particularly necessary for the website to function and is used specifically to collect user personal data via analytics, ads, other embedded contents are termed as non-necessary cookies. It is mandatory to procure user consent prior to running these cookies on your website.
SAVE & ACCEPT
Bed and Breakfast Hotei Catania